All my disciples shall take a vow to observe additional austerity during the four month of monsoon (beginning from the eleventh day of bright half of Ashade month and ending on the twelfth day of the bright half of Kartika month) and those who are unable to do so, may observe it at least during the month of Shravana.

Chaturmaas means a group of four months of monsoon. Aashadh, Shravan, Bhadrapada and Aashvin are those four months. This period begins effective from the eleventh day of the first fortnight of the month of Aashadh and ends on the twelfth day of the first fortnight of the month of Kartik. This entire period between the above two dates is called Chaturmaas. This is conventional definition, one should know it's meaning as per the religious scriptures. All my followers - means all female and male followers - should undertake special religious observances during these four months. The religious scriptures have prescribed good many observances and have classified then in light of Varna (caste) and Ashram (life stages). One should follow at least one such Niyam befitting his caste and life stage and which is most effective in pleasing God, from the Niyams which I am to narrate now. Now, those who are weak in practising the Niyam for four full months, must practise such Niyam strictly in the month of Shravan. It is said to be important to practise this Chaturmaas Vrata in Himadri region of India. 'Beginning with the eleventh day of the first fortnight of Ashadha month, men should practise these Niyam by performing fast on that day and should control all his sense organs. This four-month Niyam should be concluded on the twelfth day of the first fortnight of Kartika month. One who fails to perform Vrata in this manner becomes a sinner for the whole year. Those who are weak, should perform this Vrata for one month. The procedure of this Vrata may be known from Vrata Rajya.' 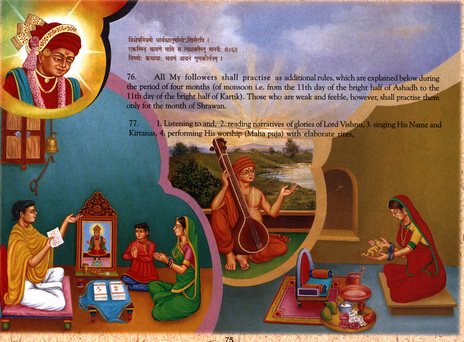