On the occurrence of lunar or solar eclipe, all shall suspend their daily routines immediately, take bath, make themselves pure, and chant the Mantra of Shree Krishna repeatedly.

Eclipse makes one unholy, Our followers should leave their household works in the period of Sun or Moon eclipse, should become pure by taking holy bath and should perform Japa of Ashtakshara Mantra (eight lettered hymn) of Lord Krishna after such ablution. This means that nobody should left without ablution and no worldly activity should be performed during the period of eclipse. Great Rishi Vasishtha has said that all become impure on appearance of Rahu. Ablution should be performed in the beginning of eclipse, and Japa - Homa should be performed during the course of eclipse. Purashcharana Chandrika says: All active people should perform ablution (to purify himself) and should perform Japa of the mantra of God till the end of sun or moon eclipse. Markandeya Muni says ablution with cold water is more beneficial than that with the hot water. Own water is more favorable than the water borrowed or taken from others. Water on the surface of land is more beneficial than underground water. Flowing water is more regardful than such surface water. Water of a lake is more rewarding than the water of a falling spring. Then comes river water whichis, comparatively better than all these, but the water from then holy shrine is far better in comparison to river water. Then comes greater rivers and then river Ganges, but the highest in reward is ablution in sea water. As Kamalakar explains, the hot water bath, that mentioned here stands for sick or ailing people, Great saint Vasishtha says that the ablution recommended here, should be practised in the time of defilement owing to birth or death in relations. Such defilement is not effective during the period of eclipse and the person stays pure of such defilement, till the release of the eclipse. Brahma Siddhanta prescribes the method for the Darshan of the eclipse and recommends a curtain of cloth to look at aclipse, also suggests to look at the reflection received in the dish of oil or water. But a pregnant women should not see such views without a curtain of the cloth. Also know that no food should be consumed three Prahara (a period of three hours) prior to moon-eclipse and four Prahar (a period of three hours) prior to Sun eclipse. Great Gautam recommends in Madhaviya that no food may be consumed in the period beginning four Prahara (a period of three hours) prior to Sun-eclipse and three Prahar prior to Moon eclipse. This restriction excludes children, older ones and ailing people. Nirnaya Sindhu prohibits such food to children, older ones and sick people for the period one prahara prior to the eclipse. In dusk, if such eclipsed sun sets, no food should be taken for the rest of the day and the night following such sun-set. And such eclipsed moon, if sets early morning in such eclipsed state, then no food should be consumed during the remaining part of the night and for the day following such moon-set. 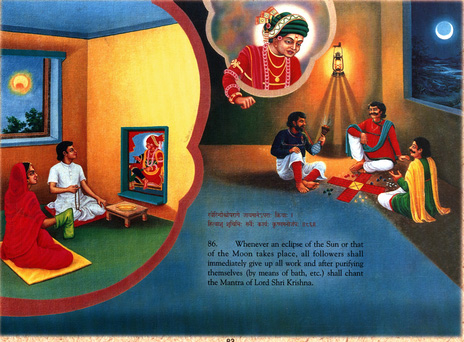