The tenth and fifth skanda of Srimad Bhagvad shall and the Yagnavalkya Smruti shall be treated as My favorite Bhakti shastras, Yoga shastras and Dharmashastra respectively.

He answers it : God Shri Krishna, who is the refuge to all his devotees and dependents, has been described and praised everywhere in this Skandh. Lord Shri Krishna says to the Gopis : Though I have the length of the age of God, I have not been able to access your virtuous and pious deeds related to your innocent relations. God has said that the devotion you are offering by breaking the chains of the worldly ways are enough for your benediction. This Skandha describes infinite love of Gopis to Shri Krishna and the devotion as a fruit of such innocent love. Therefore, it is called Bhaktishastra - the science of devotion. If there my be a doubt like - when the Gopis as such have never described Lord Purushottam with the knowledge of His divine form, then how could they possess such higher level of devotion ? To discard such foggy doubt, it says to know the hard truth that the devotion with such independence from the knowledge is possible. It is said, 'After acquiring complete knowledge about me or without getting any such knowledge about me, one who worships me with devotion, becomes my dearest devotee. Bhagwan has said: With this purpose a yogi with my devotion and a devotee who believes me as his soul, attains ultimate benediction by asceticism or ultimate knowledge.' And the words of Brahma : ' Were offering worship by giving away the efforts of the knowledge' represents single and uniform truth. 'Oh Muni ! Gopis knew Shri Krishna as their husband, but not as Parabrahm (supreme reality) : Thus those were with intelligence and Gunas, then how they detach themselves from these Gunas of Maya?' Shukdevji answers this question, 'Oh King ! That aspect of God and that personality of Bhagwan stands for the benediction of human beings. That God is non-perishable, unfathomable, beyond the reach of Maya and Gunas, and he is like soul of the Gunas. The man who is attached to God - Shri Hari - by desire, anger, fear, love or friendship constantly unifies himself in the form of Shri Hari.

The greater love of God is called devotion. The devotion shall the described in the later stage. The God has resided mainly at the four places, namely Vraj, Mathura, Dwarika and Hastinapur. Therefore the people, residing in these four places, have greater love for God. In the case of love of the residents of Vraj, it is said, 'Oh Nand ! We, the residents of Vraj have great and inseparable love for your son, but on other side, why he has very little love for us ?' For the love for Shri Krishna in the heart of the residents of Mathura, it is said that those people, when saw Shri Krishna and Baladeva, became over excited like a person who over joys on return of the wealth which he has lost long back, due to reunion with Shri Krishna-Baldevji after a long interval. Now about the love of the residents of Dwarika : The Yadavas, though were closely attached to Shri Krishna in all their ways of daily life and were attentive to Shri Krishna at the greater extent, perhaps failed to recognize him as the greatest or supreme soul. For the love of Pandavas and the residents of Hastinapur to Lord Shri Krishna, it is said that Pandavas rose like body which rises on the entry of the Prana (vital air) in the body, as Lord Mukund and Supreme Lord of Cosmos - Shri Krishna - arrived. Moreover, Narada also says that the Pandava's devotion was with great love. It is said that Gopis due to their desire, Kansa due to his fear, Shishupala and other kings due to their jealousy, Vrishini - Yadavs due to their relationship, you are due to your love and we are due to our devotion have become of Lord Shri Krishna. This is why the description of leaving kingdom and of the pilgrimage into the forests has been given while listening to the divine Leela of God's merger in the divine. Thus, the people and Shri Krishna residing in these four places and people's love in Lord Shri Krishna has been described in this Skandha. Therefore, this scripture has been called Bhakti Shastra. 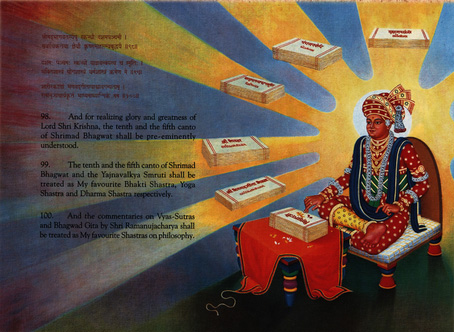