Just as Jiva is installed in the heart, so does Isha abides in the heart of Jiva as the inner controller, is absolutely independent and is the judge Supreme of all action's of all Jivas.

Now says about the form of God. The heart. In the lotus like heart. Resides in the heart as supreme knower to pervade and prevail upon. He resides in the heart as Jiva resides in body. Shrutis have said that He resides in the heart but is independent of the heart, distinct from the heart, soul is not knowing Him, soul is His body, He resides in the heart and rules on it. 'He enters in heart and resides in it, He rules over the human beings and He is soul of everybody.' 'Oh Gudakesha (Arjuna) ! I am the shelter for all living beings and I am their soul.' 'I myself enter and reside in the hearts of everybody and I am the cause of memory, knowledge and the loss of memory.' 'Oh Arjuna ! Ishwara resides in the heart of all living bodies created by him and keeps them moving through His divine Maya in this cycle of the worldly ways.' 'Oh Brahman ! I am the soul of the souls.' 'I am received by the Parmatma residing in every heart of the living bodies evolved by Him.' 'I receive through my body the ultimate truth - Parmatma - residing in the heart.' That and others are on the same line. Bhagwat has said : One who is free and not dependent on others, therefore, it derives that God is the supreme commander of Kala and Maya. 'One who is all knower, death of the death, He possesses all benedictory attributes and knows everything.' That is founded by the Shrutis. Maitreya Rishi has said 'The Kala has supreme majesty of the life beginning with the span of atom to the double of the life span of Brahma, but such Kala is incapable to regulate Ishwara of the deities - The Supreme God.' 'The Kala who received sacrifice from we distressed lots of Brahma, wind, space, fire, water, earth and three Lokas has your fear - the fear of the supreme God to whom we surrender.' - These are the words of deities. 'As the proximity of magnetic stone attracts (or activates) a piece of iron, in a similar way, the Maya in your proximity, evolves with her Gunas the universe, sustains it and destroys it for the sake of Jivas, such witness to the Guna-actions ! Oh God ! We offer our worship.' Thus it is said that Maya acts under the command of God. God is the giver of the fruits of Karmas (actions). As He is supreme commander, gives different fruits to all. Shruti says: Everlasting among the everlasting and conscious among the conscious, Supreme God - Paramatma - fulfills the desires of everybody.' 'Then from me only receives scripture-instituted desires.' 'I am the consumer of all Yagyas and Prabhu' 'Oh Anga ! only due to attachment to Gunas and Karmas, we receive pleasures and pains evolved by God.' 'The doers of unsuspicious or auspicious Karmas receive your Loka or Lokas of others from you and doers of unsuspicious receive hell from you.' These are the statements from different Shrutis. Know this Ishwara as Supreme God . Ishta (adored) means independently majestic Ishwara or the master of universe. Shrutis have said : 'Master of Cosmos and Ishawara', 'One to whom everybody surrender and one who is Ishwara for everybody.' 'I know worthy God who gives pleasures and reigns these Lokas as distant of the distants, master of the masters, divinity of all divines and Parama Maheshwara (Supreme Reality) of Ishwaras.' 'He is beyond appraisal, as he is Ishwara of past and future.' 'Ishwara of past and future is Ishwara today and will be for tomorrow.' 'He then sees being served the other Ishwara of cosmos.' 'When sees the worth viewing, all doer and red coloured Ishwara.' 'In permanence (Akshara) and perishable (Kshara) resides the same God.' 'Attains permanence by knowing Ishwara embracing whole universe.' 'He is the Master, who has no fear from anybody and gives all sided protection to the fear ridden lots. He is only one, so that fear does not rise among each other.' 'You don't accept anything excepting self attainment.' 'He the Ishwara of Ishwaras, roams on the earth and destroys the burden of earth by his power of time.' 'At whose lotus feet bows the luminous crowns of the deities, Such Lord Ramchandra Bhagwan had the friendship with the monkeys.' 'On attaining in seclusion the Ishwara of the universal Ishwara…' 'One who upholds God-trio and is Ishwara of the Ishwaras.' 'What else stands unattainable if pleases the Ishwara of Universal Ishwara.' 'Varuna earned the pleasure of Shri Krishna who is Ishwara of the Ishwara.' All these are the statements from Shrimad Bhagwat, and therefore these stand as final judgement for following it. Moreover Skand Puran says : 'He is the soul of the soul and Akshara, He is pure like sky, He is visible through a divine vision, He is pure entity, He is the power in it's purest form, He is the son of Vasudeva, He is the possessor of all benedictory virtues, He is beyond the reach of the Gunas (of Maya), He is Ishwara of Ishwara, He is attainable only through Brahm Vidya. Such Supreme Lord is meditated upon and attainable by Brahm only. 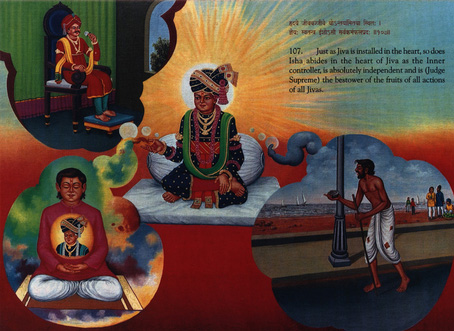