Therefore, no one shall misunderstand that Shree Krishna is different from Narayana or RamaKrishna or RadhaKrishna. He at His will appears some times with two arms and at times with four or with many.

Now, herein explains four forms of Shri Krishna namely - Radha Krishna, Lakshminarayan etc in four Shlokas. That means the one, who has those attributes, described in the earlier Shlokas. The capable one is called Prabhu or Ishwara. Iswara means Shri Krishna. Shri Krishna with Radha. The daughter of Vrishbhanu is Radha. Shri Krishna with Radha Radhakrishna. Then know Shri Krishna as Radhakrishna. Rukmini is Ramaa - Lakshmi, manifested in the royal residence of king Bhishmak, the daughter was named as Rukmini. Puranas have said : In Ramavatar, became Sita and in Krishna Janma, she became Rukmini, with her - means - with Lakshmi - know Him as Lakshminarayan, but not with any other name.

The middle brother of Pandavas - Arjuna, knows Him as Narnarayana. Mahabharat has said, 'Arjuna possesses manly emotions (of Nar). And Shri Krishna is Narayana himself. Shrimad Bhagwat says: You are Rishi Narnanarayan whose wishes are fulfilled.' Then again same Shri Krishna Balabhadra means the one who is worthy with his strength and power. His other names are Shri Krishnagraja - Shri Krishna's elder brother-Shri Rama, Shri Krishna when is with Balbhadra, Satyabhama and the others shall be called so by prefixing that name with Shrikrishna : Ramkrishna, Satyakrishna et al.

There are two ways of Shri Krishna in his life with Radha and the others - one is the way in which they are visible to everybody and another in which the others remain invisible. They stand besides Him (Shri Krishna). These - Radha and the other devotees, are some times seen standing besides Shri Krishna. Therefore, at that time they are visible to everybody. In such Darshana, know him as Radhakrishna and so on. And at times, and due to great love they are absorbed- merged - in the heart of Lord Shri Krishna and have become invisible to the viewers. In such circumstances, lone Shri Krishna is seen by everybody, but Radhikaji is not seen by them. In such Darshana, know him as Shri Krishna. Therefore, in the temples, when you see Shri Krishna alone, know under the circumstances that Radhaji and devotees are accompanying but in incognito.

Therefore, same Lord Shri Krishna, becomes known with different names like Radha Krishna, in accordance to accompanying devotee. This is why, no discriminative attitude should be adopted for the idols of Shri Krishna installed in various shrines in the country. No difference in the form of Shri Krishna should be considered on the bases of accompaning devotee with the idols. The two-armed, four-armed, eight-armed are the differences in the shape. And therefore, four-armed etc are in it's reality, Shri Krishna with two arms. The forms with four, eight or thousand arms are the manifestations of Him at his sweet will. Therefore, accept no discrimination on those forms. His darshan to king Muchkund in four-armed form, to Arjuna in eight-armed or thousand-armed, thus those depended on the wish of the devotee. Shri Krishna as fulfiller of the wishes of his devotee and Isha of the Yog-Maya commands over everything as the Supreme God. Skand Puran had said in Vasudeva Mahatmya : one who is two-armed and holds a flute in his hand.' One should know it from that scripture. 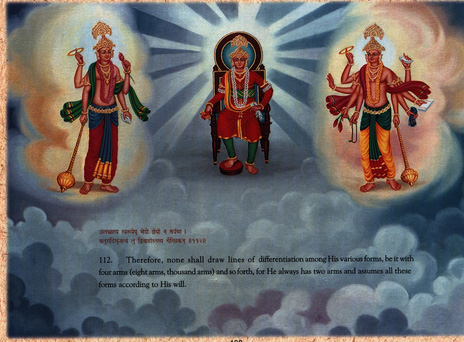