The rulers shall acquire perfect knowledge of 1. The seven constituent parts of the state, 2. The four expedient devices, 3. The six aspects of diplomacy. They shall also study and understand (through spies) the nature of bureaucrats appointed in various posts in their kingdom. They shall appoint persons who well-versed in the art of state crafts as ministers and shall be able to identify by their characteristics, the persons who deserve to be punished and those who do not deserve to be punished.

The organs of a state means the monark, the minister etc and also conciliatory, nonetary, secretive and punitive means of polity should be learnt well in detail by a king. Tirtha - shrines means the places , like missions, appointments, secret codes, etc should be learnt well and such a king should be export in his dealing - giving and taking. And they should know full well about the nobles and officers attending their court as a courtier. Also they should by the attributes the punishable persons. There are words of advice in Bharata: Master, minister, friend, treasury, state, fort and strength are the integral parts and the inherent nature of a state. One who opposes any of these, should be punished. There are four ways: Saam (conciliatory), Daam (monetary), Bheda (discriminative and secretive variation) and Danda (punishment), these should be applied in a just way. Fifth such way is ignoring or avoiding. A king should be firm in these six: Sandhi (a pact or treaty), Vigraha (disjoining from a treaty), Yaan (an attack on a enemy), Dwaidhi Bhava (differentiate), Samaashraya (inclusion) and Sthaan (position or place), these six should be decided firmly by a king. The eighteen Teertha places are: Minister, royal priest, prince, army head, chief of the fort, head of the prison, treasurer, finance manager of the investments, preacher, mayor, executive head, religious head, assembly head, magistrate, guarding head of the fort, home minister and forest officer, these sixteen places should be filled by fixing own spies in such places of of the own kingdom or in the places of the others, but a minister, prince and a state priest should not be placed there as a spy. The dealing are of eighteen types: debt, receipt and payment, deposit, sale of others belongings, Partnership dealings , non - payment of the things, disobedience to the king's orders, territorial disputes, theft, disputes on sale proceeds, disputes involving servant-master relations, breach of service contract, beating, bad and bitter words, of taking away somebody's wife, non-payment of salary, gambling invitation, property share between brothers and male-female ethical duties. 'The King should appoint such courtiers who are scholars of Vedas and Shrutis, knowers of religion, truthful and impartial to friends and foes.' Those who are not practicing personal religion, and are hypocrite, opposing virtuous people, harassing weaker people, flouting the rules of decorum, should be punished by the state . Brahmins, kings, economically weak, devotees of Lord Vishnu etc Gods, mediators, members of a greater family and Gurus are not punishable. More details on this can be had from Niti Shastra.

Shloka has 'etc', therefore, it should be understood well that from whom the toll should be recovered and from whom should it be not. The toll money means the levies to be paid to the state on taking goods across river, in a town or in the streets and markets. Mitakshara says about the incidents where such toll should not be collected: No toll should be charged on immetational ornaments, on the goods received in begging, on the remaining part of a thing already taxed, and from the artisans, children, messengers, ascetics and learners of Vedas. Also there should be no toll levied on the wealth of God. 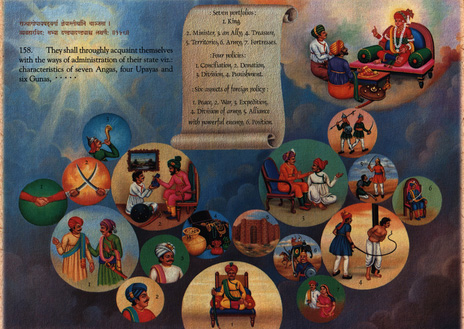