Female followers who are married shall serve their husbands like God, even if the are blind, sick, poor or impotent and shall not speak harsh words to them.

Now, in these following four Shlokas explains special religious duties of the married women whose husband is alive. The prime duties of such women is to serve their husband. Due to their destiny, such husband become blind or has become a prey to a prolonged sickness, or may have become poor or impotent, but she should treat him like her God. Narada has said in Shrimad Bhagwata , ' Oh benedictory women! Serve your husband with a conspiracy free service and serve your husband's brother too and provide sustenance to the children. This is the specific religion of a married women. Husband may be of evil nature, stuffless, aged, inactive and dull, sick and poor, but the woman desiring other world and living a sinfree life should not quit him. This is the advise of God.' And Narada says that the married woman if serves her husband as her God lives a happy life like Goddess Lakshmi with her husband Shri Hari in this world. Kashyapa has said, 'The greatest divine force of woman rests in her husband. She should not speak harsh, pinching and irritating words to her husband, but should speak sweetly, and in a favouring tone. She should act in accordance to the direction from her husband, as it is her duty to do so. And if husband of such a married woman is a great sinner, she should wait calmly for his purification from those sins. Those were the words of wisdom from the preachings of our respected ascetic Yagyavalkya. Narada has said, 'It is the daily Vratta of a married woman to serve her God-like husband and look after the brother of her husband. She should keep her house neat, clean and should attend to domestic chores, in a neat and clean dress. 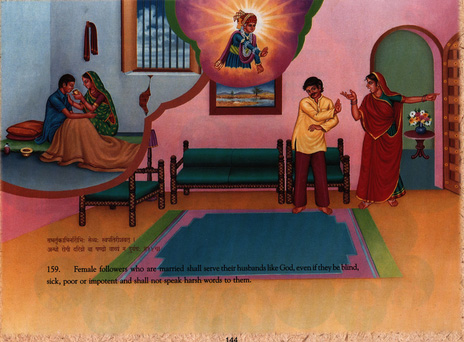