They shall study the Vedas, the Shastras, etc. and shall serve their Guru (faithfully) and shall always avoid association with effeminate males just like females.

Vedas means Rig Veda etc four Vedas. Scriptures means different parts of the Vedas such as teachings, Samkhya, Yoga, Uttara Mimamsa etc. As these are eternal by nature and aims at the benediction of mankind, they should study these scriptures. Narnarayaniya Akhyan of Bharat has mentioned, 'Oh King! Samkhya Yoga and the four Vedas are eternal.' Uttar Mimamsa or Vedant also should be treated at par with the Vedas. As Shrimad Bhagwata and other scripture have come from it they have not been mentioned separately. Or say that those have been preached so while disenssing general religious duties. Therefore, a celibate should study all these eternal religious scriptures. As this chapter deals exclusively to celibates, it shall not be a mere repeatation if they are asked to study scriptures and Vedas with all it's parts and branches. Word scripture should be defined as the parts of Vedas. At the age of eight years, a brahmin child should be given sacred threads to begin with education and study. 'Should learn Vedas', Shrutis too prescribes, 'Though, there may be no reason, a brahmin should learn and study Vedas with it's six branches. A twice born man, on getting second birth by accepting sacred threads, should stay in a Gurukul (hermitage of a perceptor) and should learn scriptures. That is the preaching in Shrimad Bhagwat for all twice born men. Also it is said that to serve to their Guru, is their ultimate duty. Ethical duty of a Bhikshu (ascetic) is to practise non- violence with tranquility, ethical duty of a Vanprasthi (a householder in his third life stage) living in a forest is to perform penance and meditation, ethical duty of a householder is to protect animals and worship God and ethical duties of a Brahmin are to meditate to his Acharya-perceptor and to stay before a Guru by holding a lower seat or bed. A celibate in hermitage should control all his sense organs and should foster companionship. On instructions from his Guru, he should study Vedas with absolute hold on sense organs, and should offer respect to his Guru by bowing head at the end of each such learning. Those are the scholarly instructions from great saint Narada. Yagyavalkya also has said that one should meditate and worship his Guru. Womanly means such thoughts or thinking wherein, one's mind is fixed in a woman. A celibate should avoid company of such people. He should leave them like leaving a woman. Kapildev has said, 'One should discard a companionship of the people who are harmful to the truth, purity, mercy, silence, intellect, decorum, prosperity, fame, forgiveness, steadfastness, control and majesty, and should leave those who are impatient, unintelligent and spiritually damaged. He should discard companionship of such people who are not saintly by nature, deserves sorrow and lives in company of women . And no other incident creates such Moha (affection) which is created by single incident of the companionship of a woman or companionship of the man having close company of a woman. The one, though may be well read and educated, but if affectious to a woman, should he be discarded by a celibate from his company, because the virtues of that person are not useful due to his drawback in relation to a woman. Ail Geeta of Shrimad Bhagwat says: What of the knowledge, penance, sacrifice, scriptural knowledge, detachment and greatness of a person, when his mind has been drawn into a woman? Therefore, there should be no dealing with a woman or such man whose mind is stuck in a woman. Even learned and enlightened ones are not trusting in six impulses, then how can I? 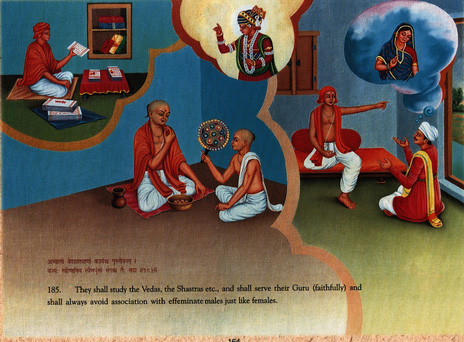