Except in emergency, they shall never got out alone without a companion at night or at any other time.

These ascetics should not move alone without company of the people at night, if they are physically well. This means that, they should not travel all alone at night without company of the people. There is no objection, if one moves in the time of an emergency. Moreover, these ascetics should not go to any place all alone. Gautam has objected against walking on the road after sunset and has said in Kritya Chintamani: One should not travel all alone on the road after sunset, should not travel with evil minded people, and should not tread a criticized path or a secret path. Now here is a doubt based on the preaching that, if many are living together or if they talks to each other, creates some times inner conflict (between the two), therefore like a bracelet of a maiden, an ascetic should walk all alone, then why it is a command here to not to go anywhere all alone? Here is the solution for this riddle : There the company of evil-minded people is being objected to, but not the companionship of saintly people. Bhagwan Kapil has said: The manac companing his relatives , if accompanies saintly people in the like manner, with equal firmness, consigns himself to the gates of emancipation. These are the words of spiritually wise. 'Those who do my devotion with a great devotional fervour.' For that they have disowned their worldly acts and relatives. They have surrendered submissively to me, and listens to devotional praises of me, and engages himself in reciting such Katha-Varta about my praises. They are with absolute meditational concentration in me. No worldly trouble pain them. Oh Faithful woman! Those only are the ascetics who have discarded everything inclusive of affection and attachment. The company of such saint, Oh Mother! Is benedictory for you, because the companionship of such people removes our inner drawbacks. The devotees attaining ultimate pleasure in serving me, have sat together listening to and telling to others my stories (katha). Those devotees are such desirefree that they even did not desire to meet me ! Ekadasha Skandha has said that one should shun the company of such evil people who are affectionate to sex organ and belly. One who walks even with such people following them, ends up in the hell, like a man following a blindman falls in the well. With this object, a spiritually wise should shun the company of the evil-minded people and should associate himself with virtuous people. Saintly people removes mental affection of the one, by their speech. These saints are desire free and attached solely to me. They are tranquil, affection free, ego free, non-conflicting and are among those who are not accepting donations . Therefore, Shri Shukdeva who was the one from such supreme ascetics, had to study Shrimad Bhagwat for accompaniment of such saintly people. Ugrashravas has said: Shri Shukdevji a dearest to the devotee of Lord Vishnu turned toward the study of this scripture (Bhagwat) to submit intellectually to Lord Vishnu and Sadhus of Lord Vishnu. Therefore, the saint too associate himself to a saint. In other Shlokas also, a company of a saint has been treated as a rarest opportunity. Therefore, it is meant here that due to adverse times, if company of a saint is not feasible, one should move alone just to avoid the chances of Asat purusha (evil minded lots). 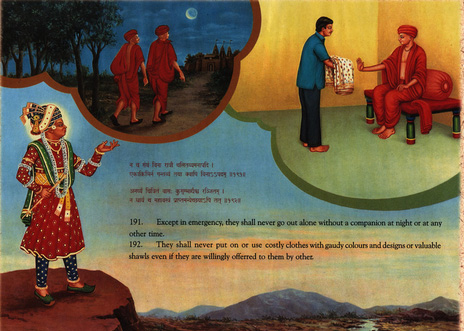