To the place of householder where food is served by a male and females are not likely to be visible.

Now in following two Shlokas says distinctively about Bhakta. The house where meal server is a male, but not a female and where cooked food is served by a male server, there - in such houses - a Sadhu should go for a meal. And if there is no facility as said above, a Sadhu there, should beg for an un-cooked food, and should cook the meal at his own. That is the meaning of the Shloka. As there is 'etc' suffixed, such food may be cooked by a brahmin. In short, it conveys that the disciplinary rules for a Sadhu are to be observed by all in letter and spirit. Though, it is believed improper for an ascetic to cook the food, but there shall be no harm in cooking the meals as these ascetics are practising the cardinal religion of serving Lord Vishnu and the meals so cooked are to be served to Lord Thakorji.

But they should not beg so for themselves. Lord also has said that those who are cooking meals for the self are eating sins . The specific attributes, as described by Lord Dattatraya, are : He lives on begged meals and while eating such meals he removes all past and future sins of his donors. 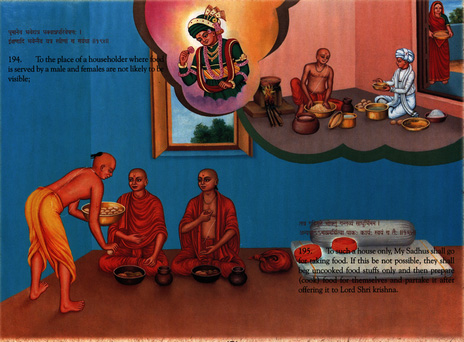