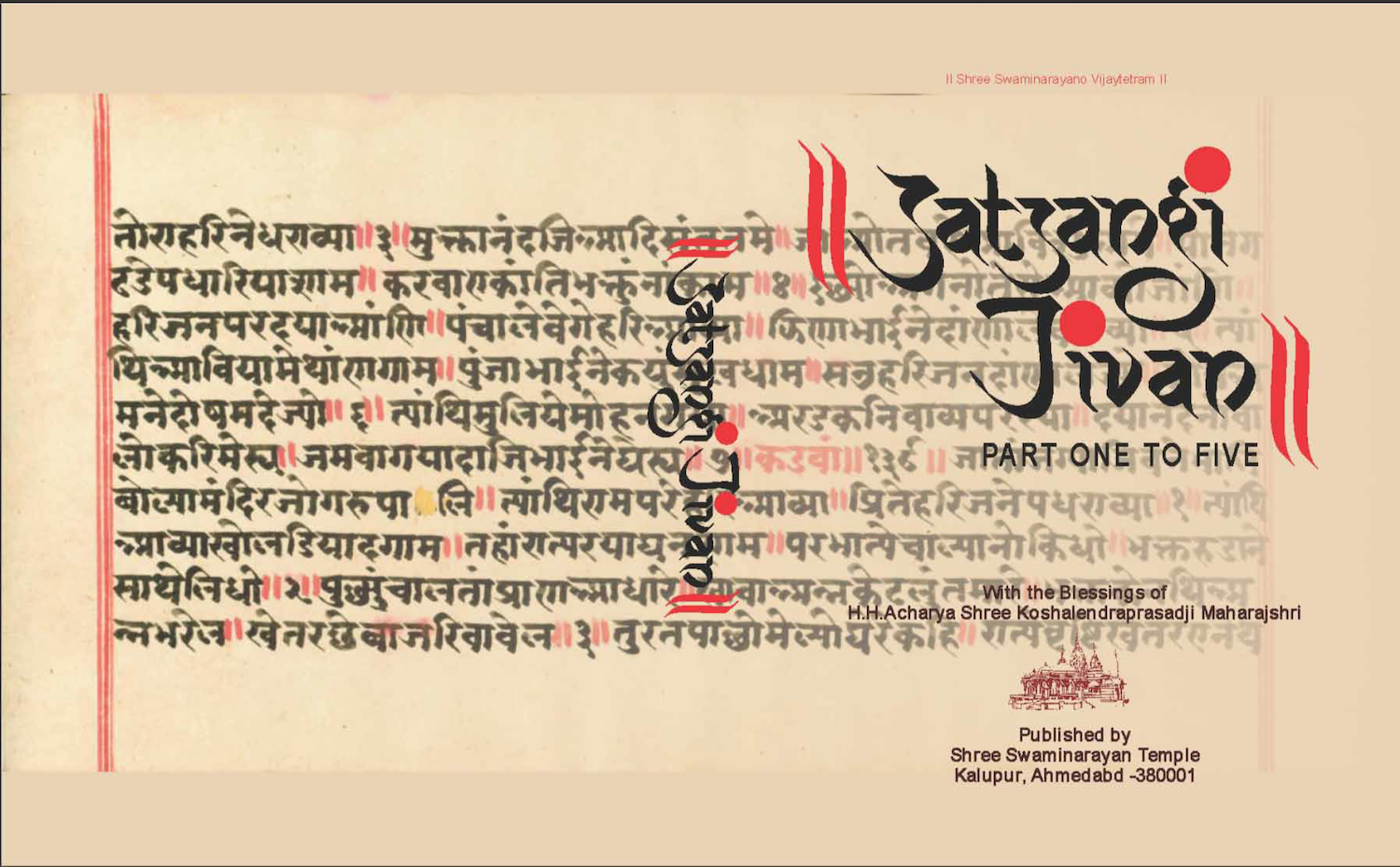 Satsangi Jeevan comprises 19,387 Shlokas among 360 Adhyaays (Chapters), in 5 Prakrans (Volumes). When Shatanand Swami brought the completed scripture to Shreeji Maharaj on Maghshar Sud 6 V.S. 1885, the latter placed it on His own head and walked through the streets of Gadhada and paraded it – proclaiming it’s authenticity.

Volume 1 narrates the prologue and moves on to tell us of the circumstances leading to The Almighty being born to Dharmadev & Bhakti Devi at Chhapaiya. After explain the childhood pastimes, we are told of the gruelling pilgrimage of all India, arrival in Gujarat, meeting up with Ramanand Swami and enthronement as his successor.

In volume 2, Shatanand Swami describes Sahajanand Swami’s social upliftment of the masses, spiritual / religious / social guidance for their personal well being and visiting followers whilst moving through villages, towns & cities.

The third volume continues the narrations of Shreeji Maharaj’s movements to teach the depths of Devotion with true observance of Dharma. We learn of the numerous acts of selfless devotion depicted by those named by Shatanand Swami. The temple construction era is also commenced in this volume. Swami then narrates the means by which Sahajanand Swami observed the ceremonial rituals prescribed by Shree Vitthalnathji (son of Shree Vallabh Acharya), celebrating every festival in the Vaishnav calendar.

The fourth volume commences with narrations of the scriptural recitals Sahajanand Swami instructed. However, this volume is primarily revered for it’s intricate explanation of the Shikshaptri, the establishing of the Acharyaships and teachings specifically to His adopted sons, the Acharyas. This volume concludes with Shreeji Maharaj teaching the various religious observances.

The final volume is dedicated to minute detail on personal religious activities, for the spiritual benevolence of the soul. It concludes with the heart-wrenching descriptions of Shreeji Maharaj’s leaving those whom He had touched and loved so dearly, but left in untold loss – promising always to remain on earth in the constituent parts of the Sampraday: Murti(s), Acharyas, Saints, Scriptures & Satsang Sabhas.