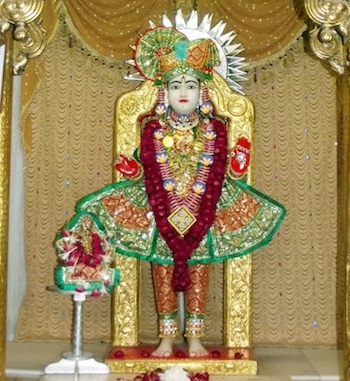 In Shrimad Bhagwat Puran, Lord Krishna says to Arjun: “Whenever and wherever there is a decline in Dharma and wicked actions predominate, I descend to earth and assume a form to protect the saints, annihilate the devils and to establish Dharma.” By the end of His physical life of 125 years, Lord Krishna had succeeded in protecting the saints and killing the devils. However, the act of establishing Dharma remained. He called Uddhavji and Markandey Muni and gave them the true knowledge of the Supreme Almighty God, who resides in Akshardham.

Uddhavji was charged with the responsibility of spreading the word of the Supreme to the masses with the help of Vidurji, leaving Markandey Muni free to carry out Bhakti. Thereafter, Lord Krishna left His mortal body and went back to Golok. Uddhavji had to convey te message firstly to Vidurji, but he could not ind the words to explain to him what Lord Krishna had already told him. He was deeply saddened by this as Lord Krishna had entrusted him with the burden of delivering the Devine Message to the masses, but he could not even find the words to tell Vidurji.

At this point Narad Muni appeared and saw the sadness on Uddhavji's face. He enquired about the source of his troubles and then advised him to go to the ashram of Shree NarNarayan Dev. There, Shree Nar and Shree Narayan Rushi's were in deep meditation, and after 2500 earth years Shree Narayan Bhagwan finally opened His eyes. At this time all the Devtas gathered to perform poojan and aarti of the lord. Uddhavji presented his problem to Shree Narayan Bhagwan and Lord Shiva volunteered to take up the task. Upon this suggestion, Shree Narayan Bhagwan closed His eyes, indicating that He approved and Lord Shiva came to earth as Sankaracharya. However, He promoted the notion of the Supreme Lord being Nirakaar (formless) rendering Uddhavji's mission unfulfilled.

Uddhavji then waited a further 500 years for Lord NarNarayan to rise from meditation once again. He explained the shortfall in the teachings of Sankaracharya to Shree NarNarayan Dev and stated that the task rendered to him by Lord Krishna was still incomplete. On hearing this, Lord Vasudev came down to earth and founded the Vaishnavacharya Doctrine. He promoted the devotion of Lord Krishna and when Uddhavji saw this he was deeply alarmed. Lord Krishna was being worshipped rather than the Supreme Lord Shree Purushottam Narayan of whom Lord Krishna had spoken when he passed on the Divine Knowledge to Uddhavji. Hence, Uddhavji's mission was still unaccomplished.

Lord NarNarayan rose from meditation after another 250 earth years. He was surprised to find Uddhavji still present before Him with hands clasped together. Uddhavji explained to Lord Narayan that the Sarvopari Bhagwan that he has come to know is not the Lord Krishna whose bhakti was being promoted by the Vaishnavacharya sampraday.

Thereafter, Lord Narayan called His prime devotee Shesh Narayan to His ashram and encharged him with the duty of fulfilling Uddhavji's request for help. Hence the Ramanujacharya Doctrine was founded by the incarnation of Shesh Narayan. Even though this sampraday propagated knowledge of the true form of the Lord Supreme and the same philosophies told to him by Lord Krishna, there was still a cloud of doubt in Uddhavji's mind. He was still not satisfied with the doctrine and he could not see this to be the propagation of the same knowledge that was passed onto him by Lord Krishna.

When Lords NarNarayan were informed of this latest failure, they invited all the great Rishis to their Divine Badrikashram. Thus the stage was set for the curse of Durvasa and the manifestation of theLord Supreme Purushottam Narayan whose message was conveyed to Uddhavji by Lord Krishna.

When all other attempts to satisfy Uddhavji failed, Shree Swaminarayan Bhagwan Himself came down to earth and protected the saints like Muktanand Swami, destroyed the evil inside people such as Joban Pagi and established Dharma through the establishment of the Dharmavanshi Acharyas.