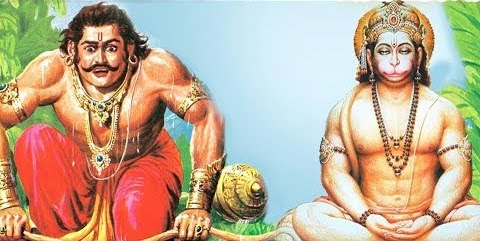 Pandavas were living in a forest. At that time, one day a lotus flower of thousand petals flew through the air and fell at the feet of Draupadi. Draupadi liked this flower very much. She told Bhim, “Bring me such other flowers.” “I will bring them just now,” said Bhim and went into the direction from where the flower came. Bhim was very much proud of his strength. He thought while going, “There is no other such Bhim as strong as I in the whole world.” Hanumanji knew about this pride of Bhim. He had a great attachment for Bhim. He considered Bhim his younger brother. So he thought that it was not proper for Bhim to be proud of his strength. Some have the strength of wealth, some have the power of knowledge, some have the strength of body; but no one should be proud of it.

Because whosoever is proud happens to be miserable. So he made a plan with a view to setting Bhim free from the pride of his strength. Hanumanji turned himself into the form of an ordinary monkey and lay down as an obstacle of Bhim's way. Meanwhile Bhim arrived at the site. On seeing the monkey sleeping in his way, Bhim roared to scare him away. Bhim roared like a lion but there was no effect of this roar on the monkey.

So Bhim said, “O, you monkey ! Why are you sleeping in the way? Get aside.” Hanuman said, “What can I do ? I am not feeling well.” “Do you know who I am ?'' asked Bhim ? “I am Bhim ! Keep your tail away otherwise I shall crush it under my feet,” said Bhim proudly. Hanuman meekly said, “O! Are you Bhimsen yourself? Then will you please lift my tail and put it aside the way ? What can I do ? I am too weak to put it aside.” “Do you mean to say I should touch your dirty tail ?” said Bhim, and continued to say smilingly, “As soon as I will touch your tail, it will be broken into four pieces and you will be thrown away very far.” Hanuman replied, “If it is so , I will not accuse you.” “You are free to accuse me, I don't mind,” said Bhim. Saying this, Bhim in order to lift and throw Hanumanji, pulled his tail. But! The tail appeared to have stuck with the ground. Bhim could not lift it up even an inch. He caught it with both the hands. Still it did not move. Bhim tried again and again. He made such vain efforts with all his might that his eyes appeared to have been displaced from their sockets to the forehead. His face turned red but the tail could not be moved or shifted.

Bhim was very much ashamed. Now he began to think, “There can never be such strength in a monkey, therefore this person appears to be somebody great. Could he be Ram Bhakta Hanumanji?” Bhim very politely said, “Believe it or not, but you are Hanumanji.” Hanumanji sprang at once and stood up and turned himself into his original form. Bhim bowed to him. Hanuman said, “ You are my younger brother. You have a strong notion and pride in your strength. To remove this false pride I had to show you this wonderful miracle. Tell me now, would you henceforth be proud of your strength ? ” Bhim's pride now had melted away. He said, “My pride is removed because of your mercy.” Thereafter Hanumanji disappeared. Bhim found out the lake with a lotus flower. He collected many flowers and returned.

“In the event of affliction caused by any evil spirit, my followers shall chant Hanuman stotra - mantra.” (85)

“They shall offer worship to Lord Shri Hanumanji on the fourteenth day of the dark half of the month Ashwin every year.”

This lesson has been prepared from an incident in `The Mahabharat'. A man howsoever strong he may be, his pride is never permanent.

There is a vast difference between Bhim and Hanuman. Bhim becomes proud. Hanuman is capable to leave aside his pride. Hanuman jumped over the ocean and reached Lanka. There he turned Ravan's Asokvatika into a desert and set the whole city on fire. But when he meets Shri Rama, he does not even refer to his feats in Lanka. So humble he is. The person who is so humble is liked by God. Hanumanji is the biggest, the greatest devotee of God. Shriji Maharaj has also praised him and has installed his idol in all his (Shriji Maharaja's) temples.